You are here: Home / Back to Blogging with SITS: Day 3
Pin
Share
Tweet
Stumble
+1
Shares 0
Welcome to DAY 3!
Today we have to re-upload a post with a title that you are partciurlarly proud of and explain why! This is another hard one for me because I’m not very good with post titles!
Usually they’re pretty plain or self explantory {i.e. you KNOW what the post is about}. For example “Mason Takes the Park” or “Surprise” {okay maybe you don’t know what that one’s about but you DO know that there’s a surprise involved!
When looking through my posts I finally found a title that I was proud of:

“The Best Gift I Could Give”

As you all know B and I aren’t exactly together. And as strange as it may sound we aren’t necessarily a part either. B came up for Mason’s Baptism, which was such an amazing day {Pictures to come later}, B and I had a very good time. It had been such a long time since I’d seen him, such a long time since he’s seen his son. I KNEW after the Baptism that I HAD to bring Mason to see B for Father’s Day. Some would say that he should of come up.

And Maybe He should have.

Some would say that I was being too nice.

And Maybe I was.

But I couldn’t NOT bring Mason to B for Father’s Day. And it had nothing to do at all with my desire to spend some time with B 😉 The bottom line is it was B’s VERY FIRST Father’s Day and I wouldn’t have felt right spending it with M alone and B alone. So I left for VA on Thursday and didn’t leave until Tuesday. The entire weekend was great. We had a good time. It was nice to be the family we had been meant to be. On Friday we just hung out, went to On the Turtle’s Back a local store that carries Cloth Diapers, went to lunch at Wood Grill {it’s an AWESOME buffet} rented movies and spent time together as a family. Saturday B had some softball games so we went to those and then we rented some movies and spent more time together! It was a very relaxing weekend!

Father’s Day was great. We went to brunch with B’s Mom, Mason’s Grammy 🙂 It was such a nice time and the restaurant Union Station, was GREAT! I really couldn’t complain about it at all! Which is always a good thing! Afterwords B decided he wanted to go to the river, it’s one of his favorite things to do so I happily said yes. And we packed up and went to the river, B’s friend J tagged along as well! Afterwards we went back to Jeremy’s house and dinner was made. The boys cooked believe it or not! Then B and I went home and went to bed early, it had been a nice long day! Here are some pictures of our day: 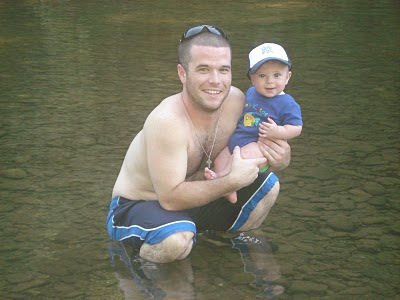 Like I mentioned earlier, we had a great weekend and I’m REALLY glad I went! Mason’s outfit said “I’m a Keeper” on it with a fishing pole and a fish which I thought was VERY fitting considering where we went!
B sent me a text on my way back to NY telling me that he felt his First Father’s Day was going to be the best one ever because he got to spend it with Mase and I. It made me feel good that I could do that for him. And I would do it again in an instant. And maybe next year B can do that for me. I guess we shall see.

There were a lot more pictures in the original post but I opted to leaving them out! If you want to see the rest of them you can click the link at the beginning that will bring you directly to that post, feel free to leave some love there.

I think I’m most proud of this title because you don’t know exactly what the post is going to be about like in all my other posts. I think I’m also most proud of this title because of what the post is about. Because it’s true. Bringing Mason to B on for Father’s Day WAS the best gift I could give and quite possibly the only one that really mattered in the long run!

What title are you most proud of?
Whatcha doing?: This week I’m joining in with the SITS Girls for Back to Blogging week! They’re being sponsored this week by Standards of Excellence, Westar Kitchen and Bath, and Florida Builder Appliances

Because You Love Me Him! 🙂

Christa is a mom to four, Mason, Kyla, Elena who grew her wings the day she was born in February 2012 and Emilia. She blogs about the things she loves; her family, recipes and whatever she's up too that week. When she's not blogging you can find her entertaining the kids or reading.